My previous post demonstrated some advantages of designed experiments using random blocks rather than the more traditional fixed blocks. My main point was that random blocks can allow for more cost-effective experiments because they require fewer runs for a given set of factors and model specification.

There is another advantage of random blocks. An analysis using random blocks allows you to make predictions of the response for other blocks. Of course, most practitioners want to make such predictions, but strictly speaking, a fixed block analysis does not allow this.

Currently, the Custom Design tool in JMP allows you to group your runs into random blocks of arbitrary size. Imagine, though, a manufacturing setting where the process undergoes random variation from day to day and also varies from shift to shift within each day. So, you have two blocking factors, and one (shift) is nested within the other (day). A new day requires a change in shift.

The interface allows for one random blocking factor, but it is not obvious how to create a design with two nested random factors.

How can you do that?

Let’s suppose that all the factors in the experiment are easy to change from run to run. If there were factors that were hard to change, we could keep these factors constant within each shift. We call a design with this feature a split-plot design.

JMP supports both these kinds of designs, and that capability provides a way to create designs with nested random blocks.

Figure 1 shows a Factors table for a scenario where we want to investigate six categorical factors each with two levels. Note that I have defined two factors called Fake VHTC Factor and Fake HTC Factor. I set the Changes column in the table to Very Hard for the first factor and Hard for the second. You may have surmised that these are not real factors, and if so, you are right.

Figure 2 shows the Model view. I have selected the first two factors. The next thing is to remove these factors from the model by clicking the Remove Term button.

Now suppose we want to run the experiment to run over four days with three shifts per day. And perhaps we can do two runs per shift. Then the Design Generation outline node in Figure 4 describes that scenario.

Clicking the Make Design button produces the design in Table 1. Notice the garbage values for the fake factors. Since they do not appear in the model, the optimal designer does not change their values from their original random settings. 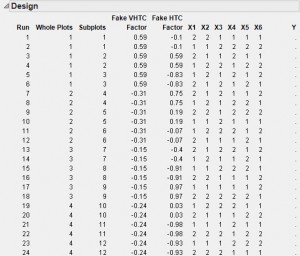 Now click the Make Table button. Once you have the table, you can delete the two fake factor columns and change the column named Whole Plots to Day and the column named Subplots to Shift. The result is in Table 2. 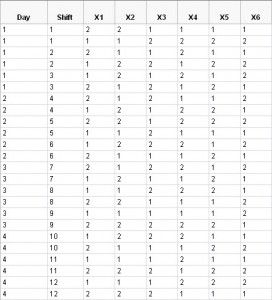 When you fill in your response and run the Model script, JMP will automatically fit the appropriate regression model with Day and Shift as random blocks.

Though the support is not as explicit as for one random blocking factor, once you know how, you can have nested random blocks. You can use variations on this approach to create designs with crossed random blocks or blocked split-plot designs. If there is sufficient interest in one of these, I can give an example in a future post. So let me know in your comments.

I have used this same approach in generating custom DOEs in JMP for assay development. The first random blocking factors is plate as one or more factors can only be applied to a whole plate and plate is nested within day as a certain number of plates can be run on day. In addition, we have several factors that can change within the rows/columns of a plate.

Thanks for this post Bradley!
Could you compare and contrast how Custom Design handles the design and analysis of:

What happens at the ANOVA level for the other two scenarios?

And are there any process examples where each of these designs would be most appropriate?