You asked for pictures in data tables to make the tables more informative; JMP 12 gives you pictures, and more. Objects like matrices and lists, JSL (JMP Scripting Language) code, and JSL expressions for pictures can all be kept in an expression column. Expression columns can provide information for display and analysis, and they can organize data and speed up scripts.

Expression columns make a special case out of picture expressions because pictures are meant to be seen. (You can turn off the special case and see 1,000 words instead, but I have not found a good reason to do that yet.) Pictures can be dragged-and-dropped into expression columns, and pictures can be downloaded from tables on the web. Wikipedia has been an interesting source of tables with pictures during our testing phase.

You can use pictures in a table to help locate a row; it might be a picture of a sample, or an outlier. You can use the pictures as a visualization. You can have multiple picture columns. You can add the label attribute and get popup tool tips with pictures in your graphs.

Here’s an example with SAS offices plotted on a map. You can see the geographical relationship on the map, and you can hover over a point to see the picture at that location. I’ve pinned this tip off to the side and turned on the tag-line to Glasgow. 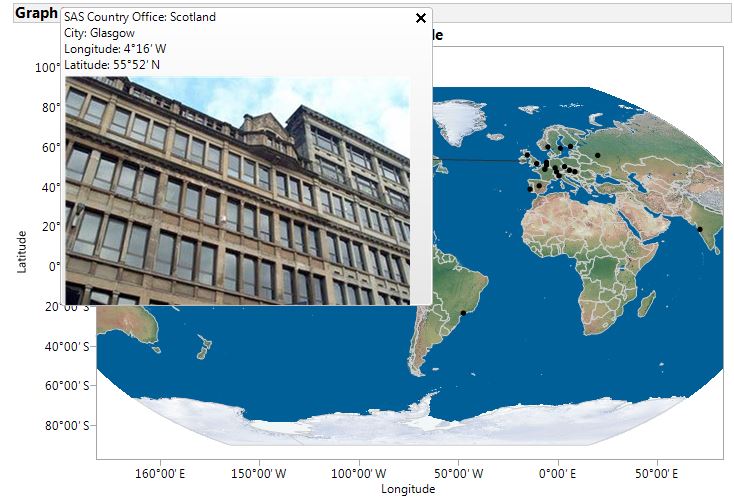 That’s a picture of the SAS office in Glasgow, from this data table: 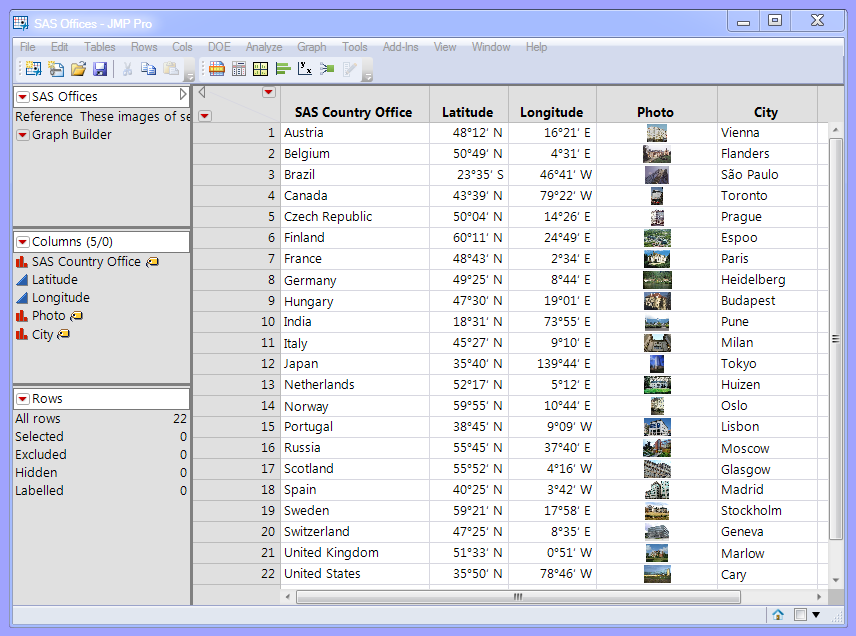 You can make the table rows taller too: 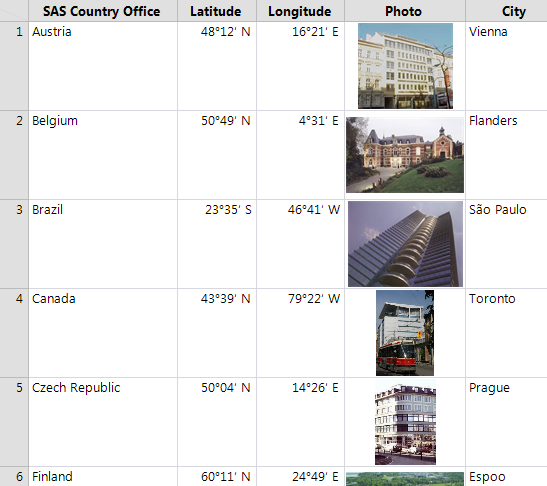 You can also put other expression data in an expression column; a matrix is a great example. Rather than using nine columns for a 3x3 matrix, just store the 3x3 matrix as a matrix.  Your JSL code will be faster because it won’t need to remake the matrix from nine values anymore. The matrix might be a transform matrix: 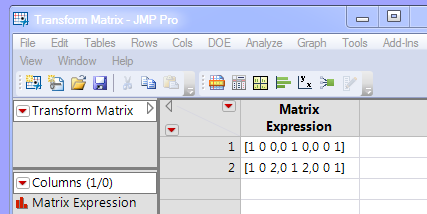 You can put code in a column too, but that’s an advanced topic, covered in my JMP User Community blog, Uncharted. Expressions columns are not the same as Formula columns; in fact, a column can be both. A Formula column has a single formula expression that generates the values for every cell. The values in the cells of an Expression column are expressions that can be evaluated.

Expression columns give JMP a new visualization tool using pictures in columns, and some other possibilities for better scripting performance and better data organization too.

How about using the pictures as graph markers instead of the usual symbols, characters, and/or special characters?

Thanks! The roll-over tool tips work in JMP 12; there's a lot more to do here.

Maybe I didn't make my question clear enough. Here's a second attempt: Could one use the pictures from your photo column as graph symbols instead of the usual legend symbols?

I should have said that you canâ t do that in JMP 12. Thereâ s more that we can do here in future releases. Weâ ll make sure we consider that.