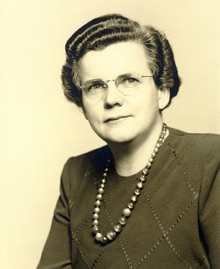 Gertrude Cox was born in 1900 in Iowa, and studied mathematics and statistics at Iowa State. After a couple years studying psychology at the University of California at Berkeley, she worked for George Snedecor in the Iowa State mathematics department while working on a PhD in statistics. Before she was able to complete the PhD, opportunity knocked.

The president of the University of North Carolina (after a meeting with Snedecor) decided to start a statistics department in North Carolina, similar to the one at Iowa State. The decision was made to put that department at North Carolina State in Raleigh.  Snedecor at Iowa State was asked to identify good candidates for developing this new statistics program. Gertrude saw the letter where he had recommended a list of all men and asked him why he didn’t include her. In the letter listing his recommendations, Snedecor wrote, "These are the ten best men I can think of. But, if you want the best person, I would recommend Gertrude Cox." A colleague warned Cox that they would never listen to a woman in the South, but she accepted the position anyway.

Cox started at NC State in late 1940, and the statistics department was established in early 1941. She was the first female full professor at NC State, and fully took on the challenge of creating a world-class statistics department, devoted to teaching, consulting and computing services in the School of Agriculture.  In the next 20 years, she expanded the presence of statistics in North Carolina in many ways. She was instrumental in creating an Institute of Statistics, which included the NC State department and helped to create statistics and biostatistics departments at the University of North Carolina at Chapel Hill. Later, she became the first head of the Statistics Research Division at Research Triangle Institute (RTI).

The legacy of Gertrude Cox is strong at NC State. My first meeting with my undergraduate adviser prior to starting college was in Cox Hall, named in her honor in 1970. (The department has since moved out of Cox Hall and is now housed in a new building, SAS Hall.) There is a an award -- the Gertrude Cox Award for Innovative Excellence in Teaching and Learning with Technology -- established to promote effectiveness in the use of technology in teaching across all of NC State. In addition, the Gertrude M. Cox Fellowship Fund provides support for graduate students in statistics at NC State. The story about Snedecor adding Cox to the list of candidates was legendary, repeated at multiple departmental graduation ceremonies that I attended during my time at NC State.

We will have another post with more recollections of Gertrude Cox on April 3 by Helena Hoen, the great-niece of Cox. I am grateful to Helena for her offer to share her recollections and for her help with this blog post.

What a wonderful post about an amazing woman. She paved the way for many others (myself included) to pursue a career in statistics. Thanks for this terrific account of Gertrude Cox's life and contributions.

Go Gertrude! She helped pave the way for women in STEM careers. Thanks for sharing her-story and reminding us that "excellence" is what rises to the top.

Visual Content: How to Re-imagine Your Brand - Heidi Cohen wrote:

[â ¦] SAS, a statistical software company, features well known statisticians on their blog. Itâ s a great way to enhance a product story where the product is difficult to visualize.Â  [â ¦]