In this International Year of Statistics, we at JMP are celebrating famous statisticians on a monthly basis. This month is my turn, and early this year I chose Professor George E.P. Box as the subject of my celebration. I was looking forward to writing this piece because I knew George personally and have been an admirer of his since the beginning of my career.

Sadly, George passed away in late March, and I wrote a remembrance of him for the JMP Blog at that time. That blog post expresses what I would have written in a post celebrating him. So, instead of speaking in general about his life and accomplishments, in this post I will focus on one of his many great papers. My plan is to write several such blog posts this month, each emphasizing a different one of his wonderful publications. One of the benefits for me is that I get to reread these papers.

In this post, I want to focus on the first of his two-part paper with J. Stuart Hunter on the family of regular two-level fractional factorial designs that was published in Technometrics in 1961.

This seminal paper is 40 pages long, and one thing I found notable about it was that the mathematical content did not go past arithmetic and a little algebra! Despite this, there are many fundamental results in this paper, but all are stated in natural language without formal proofs. That was refreshing.

Can you show this in JMP?

To reconstruct their example the way they did it by using JMP, we start by using the Full Factorial designer. We call our factors 1, 2 and 3 and our response Y. We compute the 4th column using the formula editor. The Y column in our Table 1 below has the same values as the ones they use in their Table 3. 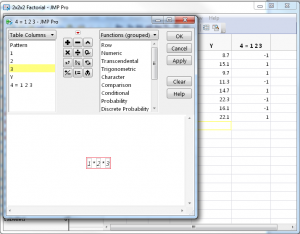 Of course, we could also just use the Screening Designer in JMP to enter 4 factors. The design we want is the first in the list. :-)

Figure 1 below shows the analysis from the JMP Screening platform. The values JMP reports are half of the quantities Box and Hunter report, because they define their effects as being the difference in the response when changing from one level of the factor to the other. JMP defines an effect as the change in the response due to a one-unit change in the factor. Since one level of the factor is coded -1 and the other is coded +1, each factor changes by two units going from its low to its high level. Thus, the effect of a one-unit change is half the effect of going from low to high.

How does the rest of the paper go?

Of course, the paper is much too long for me to cover everything Box and Hunter introduce – especially not in this level of detail. Here are some of the big concepts:

Where has design for screening gone in the 50+ years since then?

It is a tribute to the combined power and simplicity of this approach that the regular two-level fractional factorial designs are still in frequent use today. The construction and analysis of these designs does not require a computer, which made them popular when computers were rare. Of course, the calculations can be a bit tedious, so having a computer do them for you makes for fewer errors and more free time.

In the same year as the publication of this paper, Hall published 5 different orthogonal arrays for 15 factors in 16 runs. The saturated design in the Box and Hunter’s paper was one of the 5. This paper was also fundamental as it turns out that all the orthogonal arrays 16 runs for fewer factors are projections of the Hall arrays.

[...] month. Professor George E.P. Box is the honoree for May. Last week, I wrote about on the first of his two-part paper with J. Stuart Hunter on the family of regular two-level fractional factorial designs that was [...]