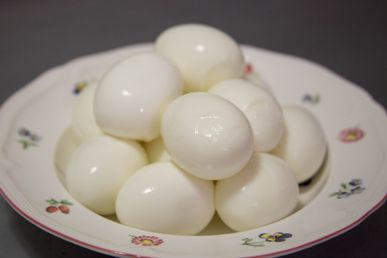 We learned how to make even better hard-boiled eggs. (Photos by Caroll Co)In my post last week, I discussed our latest eggsperiment with hard-boiled eggs – and now it’s time for the results!

As a reminder of the factors, we had hard-to-change factors:

The response is the number of seconds it took my wife to peel the egg. The peeling order was randomized and had no effect when added to the analysis.

Before I present the model, if a picture is worth a thousand words, which peeled eggs would you prefer?

Which bowl of peeled eggs would you prefer?

Just as in the first eggsperiment, if there’s one thing to take away from the results, putting the eggs into already boiling water (the hot start) instead of starting with cold water produced the nicest (and easiest to peel) eggs.

Looking at the main effects model, only the cooking start was significant. There does seem to be more to the data when we look a bit deeper. For example, examining peel time vs. cooking start, and overlaying the amount of salt suggests that there’s an interaction between cooking start and salt (notice that higher salt has lower peel times with a hot start, but higher peel times for the cold start). 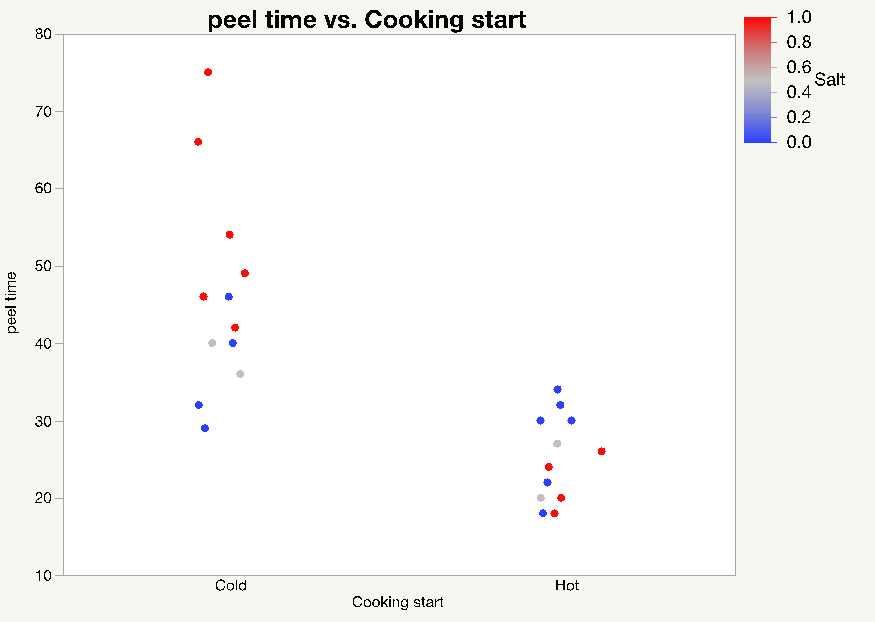 Interactions involving cooking start are also the most natural place to look for significant interactions, since the main effect is so large. Sure enough, the interaction with salt (and cooking start*vinegar) is significant, and my parameter estimates are as follows:

Not so easy to see what’s going on? Try this interactive HTML to see the results in a Profiler. I've also put the data set on the JMP User Community. Other than the obvious effect of cooking start, the biggest thing I noticed is that salt and vinegar have different results depending on the cooking start (due to the interactions). If I’m wanting to concentrate on where I observed the best results, I want to focus on the hot cooking start. It appears as if the addition of salt helps reduce the peel time for the hot cooking start, although the effect is only marginally significant analyzing the hot start subset of the data. Although it wasn't significant, I also found it interesting that cooling the eggs by running cold water over them reduces the peel time. This was also observed in the first eggsperiment – if there is a difference, I would have thought that the ice bath would be better. Maybe next time, there will be a few more eggs to get a better sense.

We will also be adding salt with the boiling start method since it appears to be helpful with peeling cooked eggs. And, for the same reason, we will continue with our practice of running cold water over the cooked eggs.

Any suggestions for another experiment (eggs or otherwise)? The peeler has also told me that if I were to do another eggsperiment, she would much prefer easy-to-peel eggs. So for the eggs option, it’s in my best interest to keep on the boiling start path (I’ve heard steaming is a good way to go too…). Thanks for reading!

I steamed my eggs this year and got easy-to-peel eggs. In the next eggperiment, you could control the cooking temperature; up to 100C for water, just over 100C with salt water, and well over 100C with steam.

Great observation - that could well be what's happening. The next time I could include temp as another factor, which should give a better sense as to how it might interact with the salt. Good to know about the steaming - it's seeming inevitable that I'll have to include that next time. Thanks for the comment!

From what I've read on egg-boiling before, it's not likely that the the increased boiling point that follows from increased salinity has a noticible effect. The boiling point differences following from cooking at different altitudes is potentially important. I think hot start is more important for soft boiled eggs, since a steeper temperature gradient is required in order to raise the white-temperature enough to get proper coagulation of its proteins before the yolk gets to hot. From a practical point of view, a hot start is preferable because it's repatable. A rolling boil is a roling boil, but a cold start could have different temperatures depending on the stove, the pot, the amount and temperature of the water etc.

A set up for this kind of experiment is fun for food geeks. A set up and code for wine tasting would be exiting as well.

Btw, this article summarizes the state of knowledge on boiling eggs: https://www.chefsteps.com/activities/the-egg-calculator

Hard-cooked eggs are a great snack that offer few calories and 6 g protein. I have destroyed many eggs trying to get the shells off, and wondered why some were easier to peel than others. So studies like this are nothing to yolk about.

Great information, and I had not come across that calculator/article before. I agree with you on the hot start being more practical - too many times did I overcook via the cold start due to moving onto something else for too long while waiting for the water to boil.

A wine (or beer) tasting would be fun, and likely easy to find volunteers. At the 2015 JMP Discovery Summit, one of the talks was on blending wine: https://community.jmp.com/docs/DOC-7756

I was showing my wife your blog post and asking her how she starts her hard-boiled eggs. She is a cold starter. I will try to convert her based on your analysis. :-)

Absolutely genius eggsperiment! Never thought there will be a scientific way to prove these theories.

I followed the perfect time for boiled eggs cooking guide as the chart helped me pick the right cooking time.

Great experiment. According to my experience with boiled eggs, it is true that it is easily peel the eggs into the already boiling water. The next step is to use a water bath or put it in the refrigerator to get good results.