A recent article in the Denver Post mentioned a statistic that I found shocking. It said the average margin of victory in the 2016 US Congressional races was 37%. I doubted that figure was correct, so I pulled the data from ballotpedia into JMP using Internet Open and took a look. It turned out to be true: The mean margin of victory was 36.6%. And the median margin of victory is over 30% (shown below). 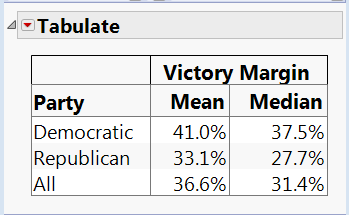 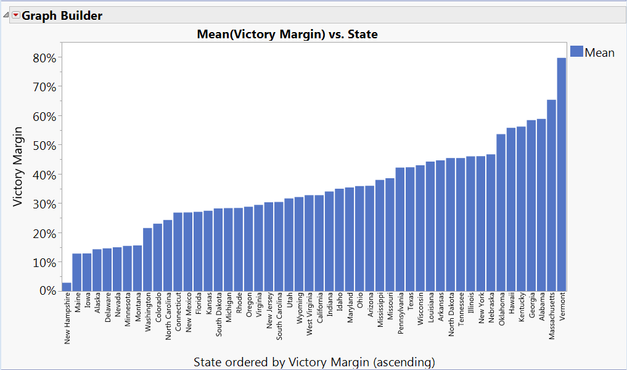 Wow! So were there any close Congressional races outside of the state of New Hampshire? I loaded all the Congressional districts into JMP and colored the map by margin of victory (zoomed on continuous 48 states). As you can see in the graph below, there are quite a few dark red and dark blue districts, which indicate wide margins of victory. 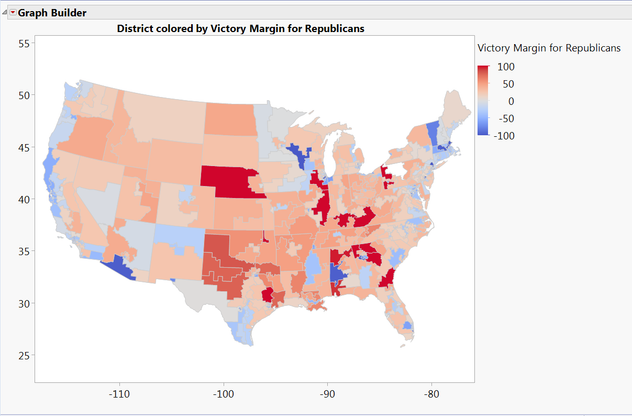 I am calling races that have victory margins within 10% competitive, but that is not necessarily true. If a Congressional race ends with the winner getting 54% of the vote and the loser getting 46%, that is not exactly a nail-biting race. If we look for districts that were decided by less than 5%, we are down to 17 (shown below). That means that less than 4% of the races were truly competitive. Also, only eight states had any Congressional race that was decided by less than a 5% margin.

Below is an animation of my search for these few truly competitive Congressional races. I’ll leave it to the political science scholars and pundits to talk about why this happened and what it means for the country.

Great analysis, and great chatting with you today. Would be interested to see other data overlaid on this, like whether an incumbent was on the ballot, what were the voter registration statistics/voter turnout %/results in the Presidential race, income and educational attainment of voters, and well as the relative comparison of the 'strength' of the candidats in the race (i.e., did one campaign have significantly more resources that the other) - might see some corrolations between those dynamics and the results in the Congressional contest. One we are watching specifically in NC is the population growth patterns (i.e., does a district contain a lot of 'newcomer voters' who tend to be more driven in their voting attitudes by the national electoral trends than influenced by what's happening specific to North Carolina politics).

As the issue of how best to draw legislative (state Hosue and Senate, and Congressional) districts heats up as we approach 2020 and the necessary reapportionment process, wondering if - from your research that produced this analysis - you have any insights on what might be good 'scientific' standards that could be applied to how district lines are drawn?

Great talking to you as well thanks for the comment.  I agree it would be really interesting to see how the campaigns spent money and turnout also how each congressional contest compared to the presidential race.  Also you brought up great points about how the population is self segregating and becoming more urban.  Also the growing number of unaffiliated voters is another interesting challenge.  I will look at adding onto this once I get some free time.