If you follow pro football (and probably even if you don't), you know that last night the Denver Broncos beat the New England Patriots to earn their spot in Super Bowl 50. But as if a shot at the Super Bowl wasn't big enough, this game meant even more than usual. It was the 17th meeting in one of the great rivalries in sports: Peyton Manning versus Tom Brady. Brady owns the lead with 11 wins in their 17 meetings and four Super Bowl championships to Manning's one, but I think most people would agree that they are two of the best quarterbacks of all time.

With both players in their late thirties (Brady is 38, and Manning is 39), one has to wonder how many more times these greats will face each other. That being the case, now seems like a good time to look back at how Manning and Brady have performed over the life of their careers.

I'm more of a casual football fan (if you've read other posts, I'm a much bigger basketball fan), so I wasn't sure which metrics might be best to evaluate quarterbacks. So I decided to stick with two: completion percentage and yards per pass attempt. There are no shortage of ways to evaluate a quarterback, but for our purposes I thought that these numbers were a good way to evaluate their accuracy and effectiveness.

If we plot these statistics over their careers so far, do we notice any trends? It looks like they both started slowly and improved with experience, not exactly surprising or exciting. Instead, let's use a statistical model to see if we can gain more insight into how these quarterbacks have changed over time. 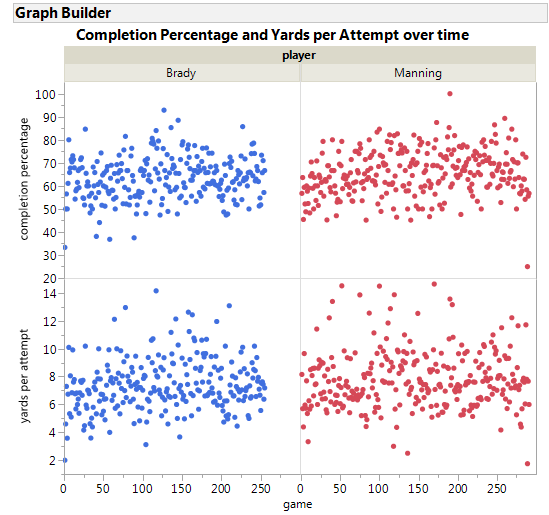 One way of modeling something like completion percentage is to assume that after adjusting for things like home-field advantage and opponent, the completion rate is piecewise constant over time. For example, maybe my true completion percentage is 50% over my first 20 games, then everything clicks and I am a 60% passer for the next 50 games until I have a serious shoulder injury and I drop down to a 45% passer for the remainder of my career. We can fit this model using a variation of the fused lasso that I described when analyzing LeBron James's dominance in the playoffs last year. 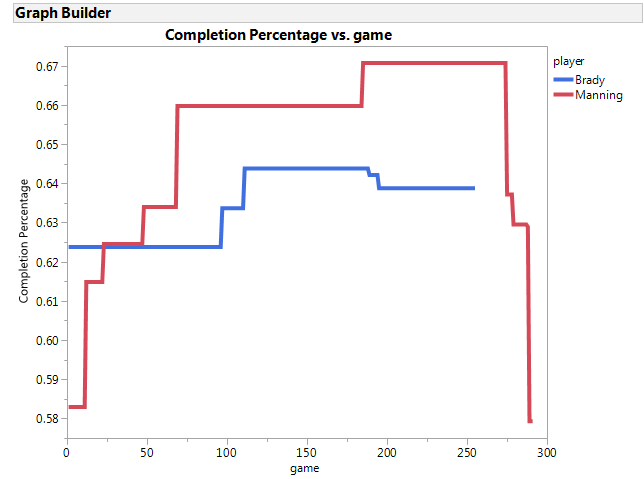 Tom Brady and Peyton Manning are two of the best quarterbacks of all time, and their rivalry has been a lot of fun to watch. By using a variation of the fused lasso model, we are better able to understand how their performance has changed over the course of their careers so far.

Neither player is as accurate or efficient as they might have been in their primes, but they are both still playing at a very high level. Could we use these models to say that one of these players is better than the other? I don't think so. Making such an evaluation is far more complicated. But it is still fun to look back at how these two players have changed over the years.

It is confusing that you changed the meaning of the colors mid-analysis. First red-blue distinguished the two statstics, but later the colors represent the athletes.

Good catch! It should be fixed now.