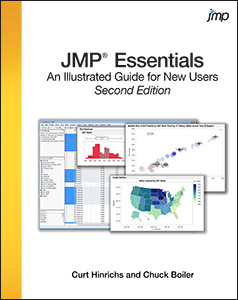 Are you new to JMP or just use it occasionally to explore and analyze your data? There are many resources that can help you quickly get your work done with JMP, including documentation, webcasts and the User Community. But sometimes, the best thing is a book that guides you, step by step.

JMP Essentials, by Curt Hinrichs and Chuck Boiler, is that book. It's for the new user and occasional user of JMP who needs to get the right results from their data right away. It's designed like a cookbook, Curt and Chuck said: "Find what you need and follow the steps." After a successful initial publication of the book four years ago, the book is now in its second edition.

Curt has led the Academic team for many years and knows all about the learning needs of university students as they use JMP to understand statistics, data analysis and data visualization. Chuck leads the group of systems engineers at JMP and has the inside scoop about commercial customers' experience of the software. In addition, you may know Chuck as the founding instructor for the Getting Started With JMP live webcasts for beginners. So this pair are the perfect authors of a book for new users.

The book is available for purchase online.

Curt and Chuck told me a bit more about the new edition of book:

In your experience, who is using JMP Essentials? Who should use it?

We wrote JMP Essentials principally for the new user of JMP, with the goal of getting that person up and running and generating meaningful results quickly. In the first edition, we have found this intended audience to include commercial customers transitioning from another statistical software, students in introductory statistics courses and quite a few spreadsheet users who want to go to that next level of data visualization and analytic capability. While JMP is not difficult to use by any measure, its navigation is different from other statistics packages or spreadsheets, and we have tried to present this along with the “essentials” of JMP in the most efficient way. In fact, much of the coverage in the book has been influenced by the Getting Started with JMP weekly webinar that Chuck hosts and the needs that I typically see among new users in the academic community.

Why did you write a second edition of JMP Essentials?

We are grateful that the first edition was well-received and that readers reached out to give us feedback on the book. That feedback prompted us to begin considering how we would approach a second edition. Plus, the first edition was written with JMP 8 and now – being on the eve of version 12 – we found many areas in need of revision or addition that are reflected by the four versions of JMP that have been released since. Mind you, we have tried to keep these revisions/additions true to our essentials of JMP scope. There have been many useful  enhancements to JMP in the areas of statistical modeling, reliability, design of experiments and consumer research in these releases, but these areas are beyond the scope of the book and covered especially well by other books and JMP documentation.

You may notice that we’ve gained a little weight in the second edition! That is, the page count has increased by about 25 percent. This wasn’t intentional but is reflected in many of the sections we revised for accuracy, expanded for clarity or added to the book. Even after extensive editing, the content needed to grow just as the audience for data analysis seems to be exploding. The additions to the second edition should serve these new audiences. We have added eight new sections to the book that we think will appeal to many users; they include Filtering Data, Creating Maps, Using the Excel Import Wizard, Combining Windows Into Dashboards, and Sharing Dynamic Graphs with HTML 5.

Can you give us an example of a technical tip that is in the new edition?

It's hard to pick just one tip, but one that we think will be a real time saver is the support in Graph Builder for background street maps with density contours. In the context of positional mapping, seeing the frequency and density of occurrences of anything with a street map can be very enlightening. This is especially relevant with the advent of handheld devices that provide location data, which are becoming ubiquitous. The San Francisco Crime map example in Chapter 4 provides an introduction to this useful feature that also employs filtering, which is covered in Chapter 2. All you need are data where latitude and longitude have been recorded.