In my previous blog entry, I discussed the purpose of the Alias Matrix in quantifying the potential bias in estimated effects due to the alias terms. In this blog post, we look at an example that creates a D-optimal design and an Alias Optimal design with the same number of factors and runs.

Consider an experiment where we have six two-level categorical factors denoted by X1 to X6, and a budget of 12 runs. Our interest is in the main effects.

We start with the D-optimal design. Using the Custom Designer with six factors and 12 runs for the main effects, JMP will find a D-optimal design by default. If we take a look at the Color Map On Correlations below, we see all the main effects are orthogonal to each other, but correlated with two-factor interactions (absolute correlation of 0.3333). Since our model contains only main effects, looking at the design diagnostics and estimation efficiencies reveal that we are not going to find a better design for getting precise estimates of the effects in this model. 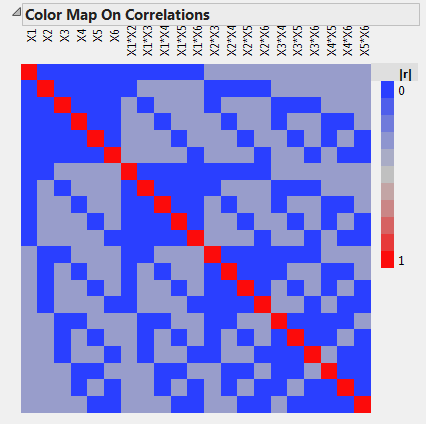 Taking a look at the Alias Matrix, we find the following:

What if I want to minimize this bias?

Surely, if there is a blog post on this topic, there must be a way to deal with this. In Custom Design, before hitting the “Make Design” button, if you take a look under the red triangle, you’ll notice a few different options under Optimality Criterion. What we want is to select “Make Alias Optimal Design.”

Setting up the same 12-run design with the Alias Optimal criterion, we get the following Alias Matrix:

However, there is a cost for choosing alias optimality. Examining the Color Map On Correlations, we see that the main effects are not all orthogonal. Whereas the D-optimal design was 100% D-efficient, the alias optimal design has a D-efficiency of around 92%. Examining the Estimation Efficiencies tab, we see the confidence intervals for the main effects are about 10% longer compared to the D-optimal design. If the bias from the alias terms is a concern, this seems like a small price to pay. 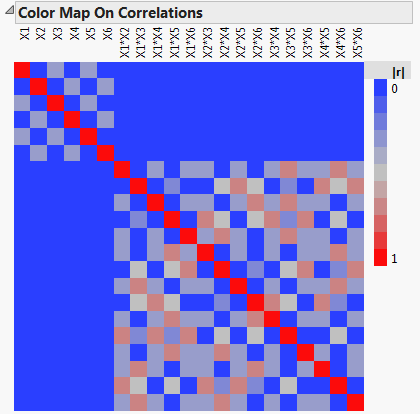 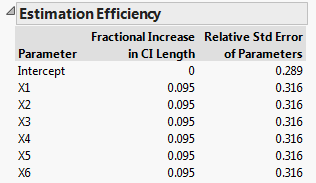 Which design should I use?

The choice between the two designs depends on how concerned you are about the number and size of active two-factor interactions. The D-optimal design gives more precise estimates of the main effects, but you run the risk of biased estimates if two-factor interactions are important. The Alias Optimal design protects from this bias for a small reduction in the precision of the estimates.

This was a very clear explanation. Thanks!

If you could afford 1 more run, would a Definitive Screening Design be a better choice? As I understand, there would be no correlation between the main factors and any 2 way interactions, and the Alias Matrix would show zeroes all the way across. It might be nice to have a "Part 3" focusing on this idea. Thoughts?

If I'm dealing with 2-level factors only, I like to use the Custom Design platform since I have some flexibility with the D-efficiency weight under advanced options.

Thanks for the input and suggestion, and for interested readers, there is an original blog post on definitive screening designs.

Some of the mark-up is not rendering correctly.