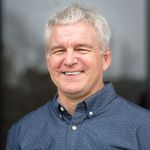 Thanks for the enlightening comments to my blog post "I Like 3-D Pie Charts" and for the new graphs. While the bar charts from Joe and John are very nice, I prefer vertical bars because of their connection with the gravity orientation of trees, mountains, buildings and of course cell-phone signal strength. It’s interesting that Paige and Lee suggest 2D pie charts. Warning: The graphics gods are watching you. Daniel, I’m glad you did not sleep through Art Appreciation in college.

SAS is well known for its corporate amenities, and its cafés are no exception. I was in line for lunch the other day and came upon the always tempting dessert case. The middle shelf featured over a dozen haphazardly arranged pieces of another one of my all-time favorites: chocolate crème pie. Simply irresistible. Maybe it’s my upbringing, but I had absolutely no problem identifying the largest slice. I don’t think it’s a guy thing either, because in the extra second I took reveling about how good it was going to look on my tray, the woman behind me handily placed it on hers. How dare she! But I was smiling inwardly as I quickly grabbed the next largest one, not only because we were likely identical by state for a latent canine quantitative trait, but because I had some more assurance that at least some humans are actually decent at assessing the size of three-dimensional wedge shapes. The psychological experimental evidence cited to the contrary is largely conducted on college students who are really only good at determining how much liquid remains in bottle-shaped objects.

This has me wondering if exploding pieces of the pie chart might actually be helpful in avoiding volumetric distortion. If nothing else, exploding and appropriately labeling one or more pieces seems like a great way to emphasize them, and, conversely, leaving the really thin slices unlabeled is desirable when they are not of interest.

Regarding ordering of slices or bars, I forgot that in examples like this one there is an overriding analytical criterion. In statistical modeling in general, one typically puts main effects first, then two-way interactions, then succeeding higher order interactions and finally residual/unexplained variance. One way to accomplish this (or any other ordering) in JMP is with the Value Ordering column property. For our example, if you first run JSL code like the following…

…then the bars appear in the desired order. We use such a column property in JMP Genomics scripts to make sure chromosome plots appear in numerical instead of alphabetical order.

If you’re having trouble comparing sizes of slices in the next pie chart you see, just pretend that it’s your favorite dessert and you’re really hungry. Works every time.

Thanks Paige. If we can identify the largest slice, then the next largest, then the next, etc. we have an effective ordering. Sorting conventions can also help with this.

Your 40% vs 52% example is definitely a case where pie charts have an advantage over bar charts, because a 50% slice is very easy to identify (as in my original example), as are pieces that are just less than 50% or just greater. The angle between the two internal edges of a slice flips when going from less than 50% to more than 50%.

Distortion can result from slices in the front appearing bigger than they are in reality. I was thinking explosion would help with this because the back slices get more pixels from the revealed edges. Thickness should not matter much because it's constant for all slices, and volumes are proportional as desired.

The issue here isn't to identify the largest slice. The issue is to visually convey data ... and if a 3D pie slice is supposed to represent 40% of the data, but it appears to the human eye that it represents 52% of the data because of volumetric distortion, then your plot has failed its primary objective, in my opinion.

My guess is that exploding the slices of a 3D pie chart makes volumetric distortion worse, as you can see more of the "sides" of the slice.