Sign In
Turn on suggestions
Auto-suggest helps you quickly narrow down your search results by suggesting possible matches as you type.
Showing results for
Show  only  | Search instead for
Did you mean:
Options 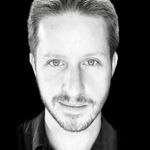 Simulating the estimation of the population variance (Why n-1?)

The attached script is useful for demonstrating the bias in estimating the population variance/standard deviation without using the corrected sample estimator (with n-1). This script can be used during lecture to demonstrate the concept, or can be given to students to use an an exploratory exercise.

1. Run the attached script by pressing Control-R (on the PC), and Command-R (on the Mac).

2. Specify the population parameters, sample size, and number of sample to draw. (10k or more samples is recommended, and should take less than ~3 seconds on most computers) 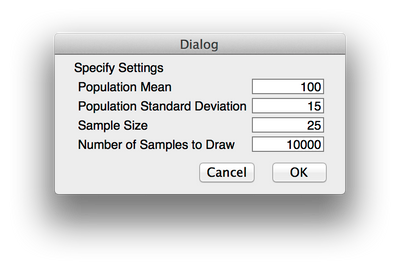 3. The table of sample estimates will be generated, including:

4. Run the saved scripts in the table to visualize and interact with the observed estimates. In the interface you can: 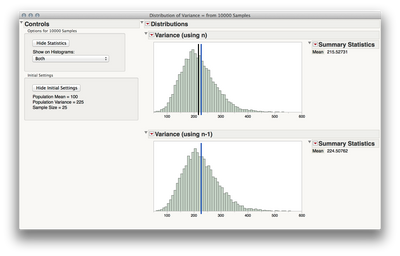 For ideas on using this script, see the Video Demo that I use in my course.

This script was developed in collaboration with mia.stephens. Please post any suggestions for future versions.

We hope this helps with your teaching!