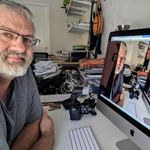 I have been writing and running Queries using Query Builder for a few months now, and have a number that were working very pulling semiconductor in-line process data from an SQL database running on IBM AS400s.  Starting this week, all of the queries that go to that particular database started hanging just after it gets through the autenication step.  Oddly, queries to the same database, through the same ODBC connection on the same PC using Excel Query Builder work just fine.  And queries from JMP to another database also on the same conmputer also work just fine.

Clearly it is something between JMP and the SQL database connection, but I' looking for some pointers here.....